DIOR PARADE: AN OPEN SKY SHOW, WONDER AND CULTURE IN AN ILLUMINATED AND DANCING LECCE. 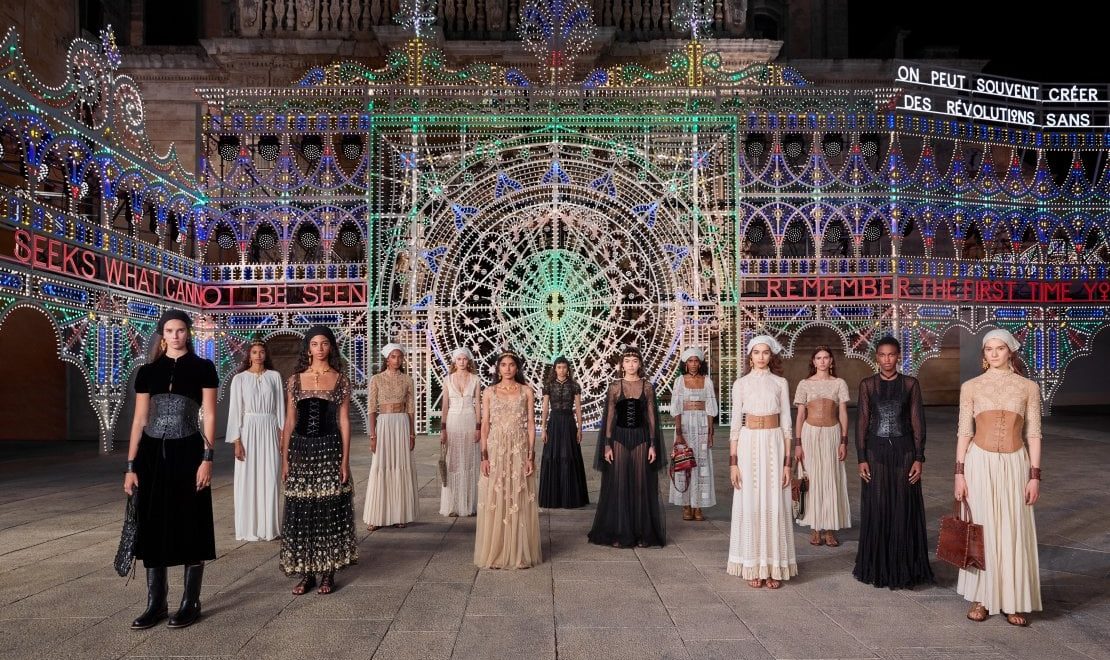 A magical evening, a surreal and evocative atmosphere, a journey through the memory of beauty, art, traditions, culture, history and Italian craftsmanship.

So Maria Grazia Chiuri, artistic director of the Christian Dior maison, decided to present the Cruise collection, showing her clothes in an exciting fashion show in the wonderful and baroque Piazza Duomo in Lecce. But it was not just a fashion show, it was much more, a real show, a tribute to Salento, to the wonder of the south. Puglia has always been the land of her heart, where Maria Grazia Chiuri has spent most of her life and where every summer she returns. A return to the origins, therefore, to tradition, to profound values, to simplicity and a hymn to femininity, which also transpires in the wonderful clothes presented. 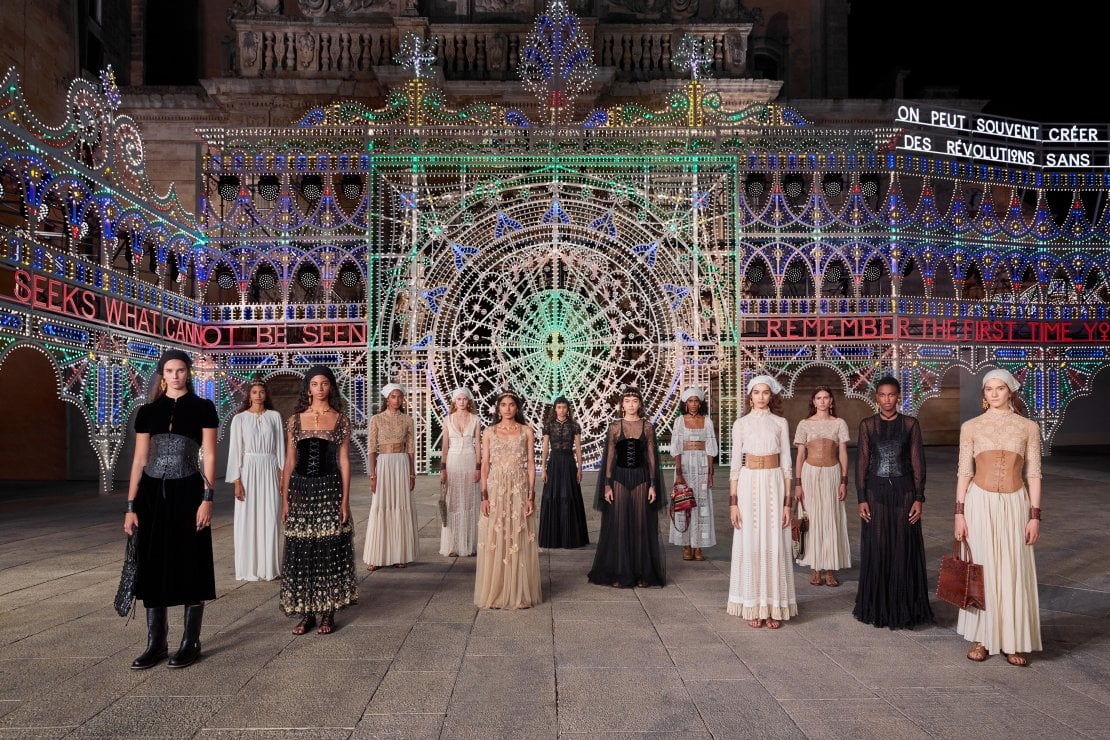 The square was set up with games of lights, striking colored illuminations, revolutionary phrases to want to remember that everything can be created, everything can be done if you really want to. To open the parade, the corps de ballet of the Notte della Taranta and the voices of the Salento pizzica, which enchanted everyone, taken by the rhythm, the excitement of the dances and the pathos of the dancers. 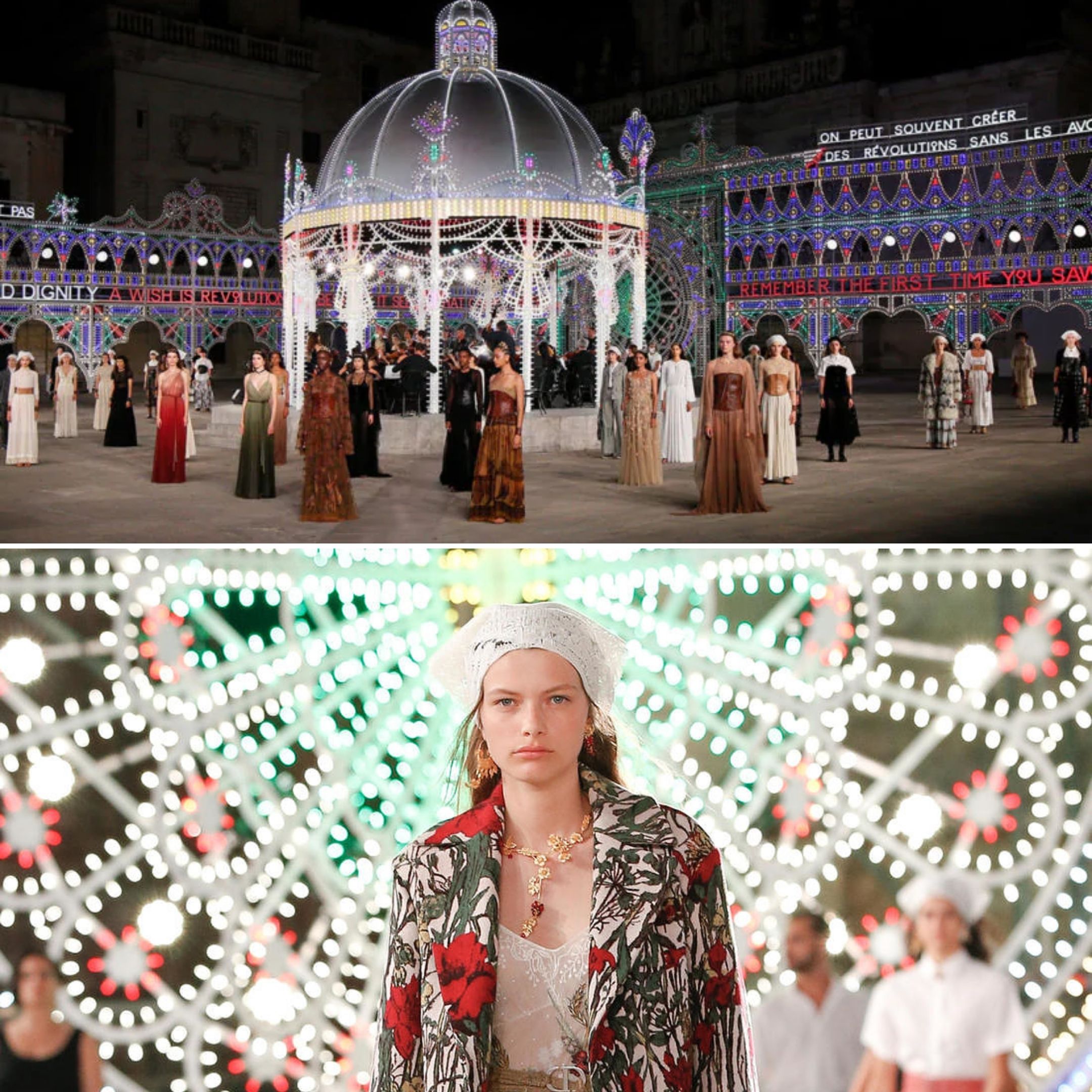 The undisputed star of the evening is Made in Puglia from beginning to end, starting with the poignant rhythm of the music played on the stage at Cassa Armonica (also a symbol of the traditional festivals of the southern countries). The taranta dance is the background for the outputs of the fashion show: each look is memory, memories, culture, know-how, simplicity and art.

The 90 looks parade on the pebbles of the magical Baroque square, one more magnificent than the other. The iconic garments of the maison are reinterpreted through the fabrics and loving workmanship of the Le Costantine Foundation. The Miss Dior floral motif is also reinterpreted in a local key, the clothes are transformed into fields of wheat and poppies, with bright colors, but natural, true, vivid, authentic like the landscapes of beautiful Puglia.

The light cotton dresses, the embroidered skirts, the shirts, the bodices, the short jackets, the long and light dresses, crocheted knitted dresses, expression of an ancient tradition, to be worn, to be enhanced and deeply loved, as we must love our beautiful country. 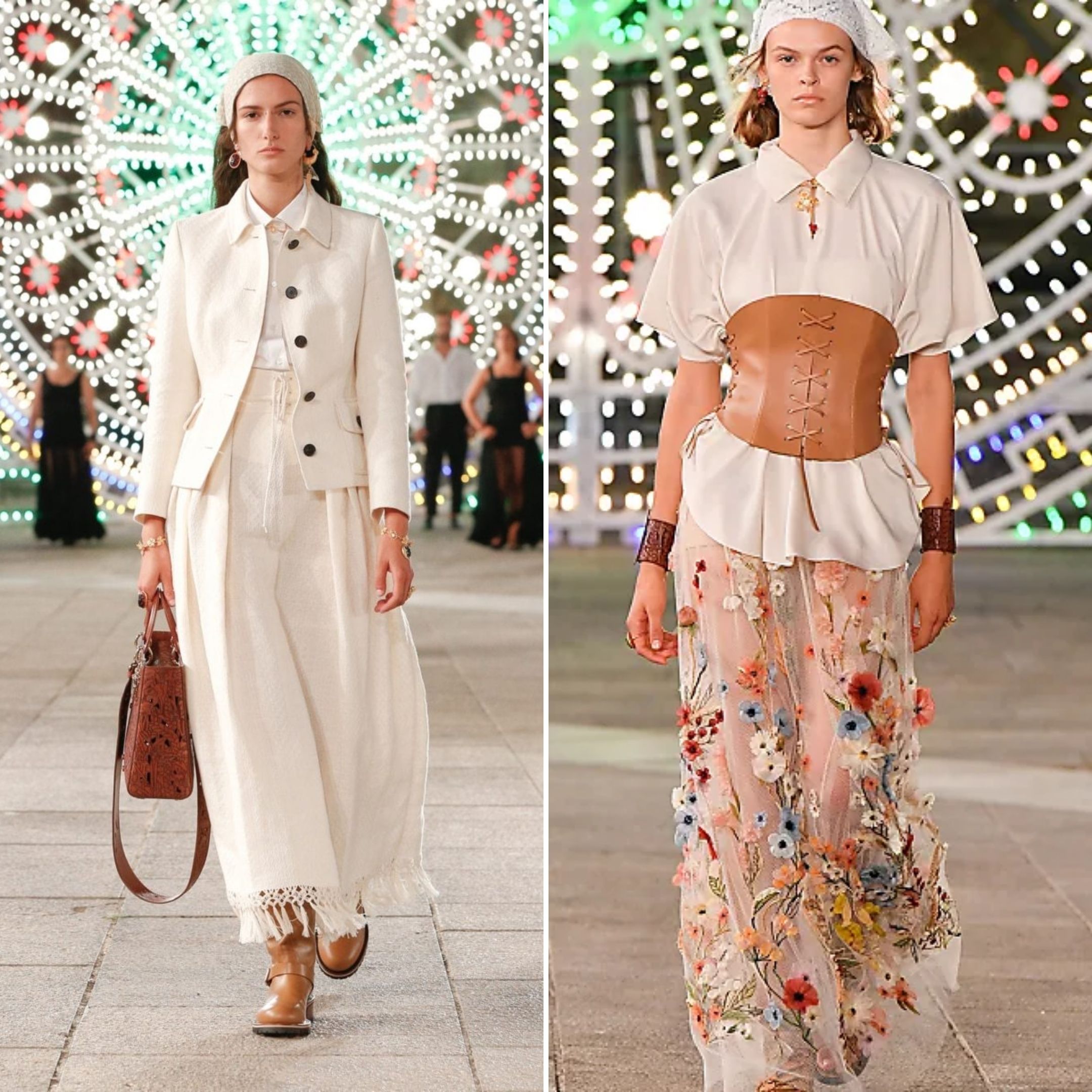 Elegance, avant-garde, pure refinement, emotions and suggestive magic. This is what the parade behind closed doors has transmitted to the few guests present and to the thousands of people who followed it online, caught by so much wonder and by the desire to live the Salento, pure and real and, why not, also to organize a wonderful wedding.

If you too, observing the parade, wanted not only to visit Salento, but also to celebrate your love here, take a look at the churches that we have selected for you. From the splendid baroque facades, still in time, uncontaminated and surrounded by art and nature, rich in charm and history, here are the places to celebrate your wedding and then continue in one of the many wonderful locations in Puglia. A unique wedding, in the name of tradition, all-Italian hospitality, good food and the charm of the place. Puglia, a land rich in history, art and culture and wonderful locations, characteristic villages, historic and sacred churches and suggestive and enchanting baroque squares. 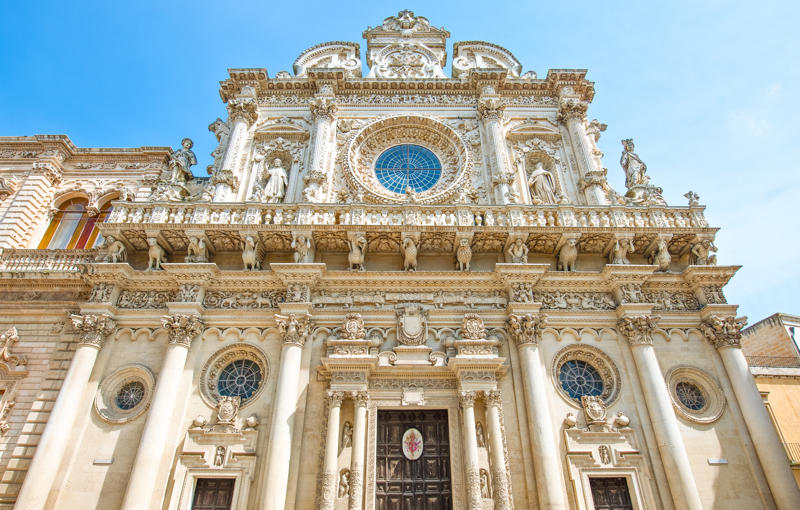 Considered the emblem of the Lecce Baroque, the Basilica of Santa Croce is one of the most important and admired churches in Lecce. 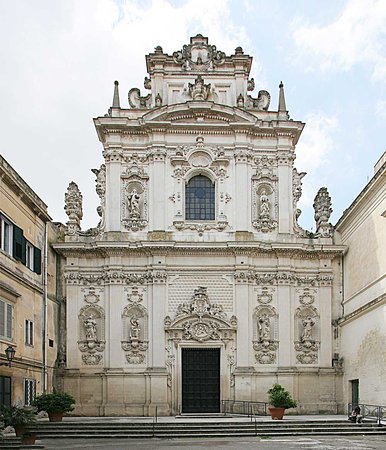 A triumph of friezes and decorations lights up the facade, an elegant introduction to the interior with a Greek cross plan, where there are three chapels on each side and a large nave that crosses the transept in the center of the presbytery. 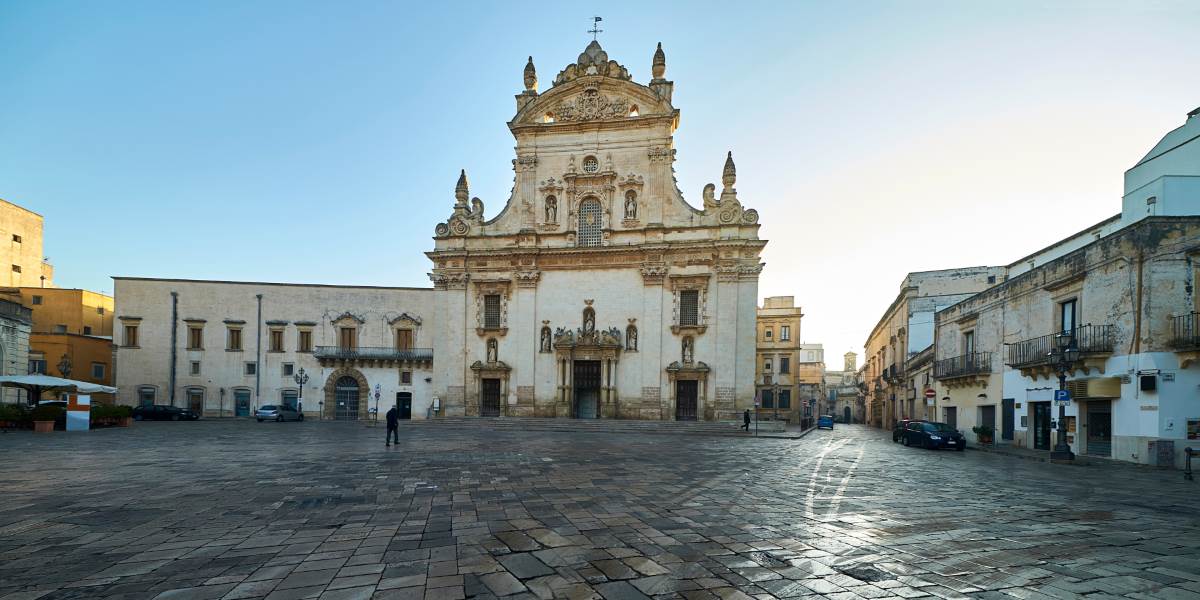 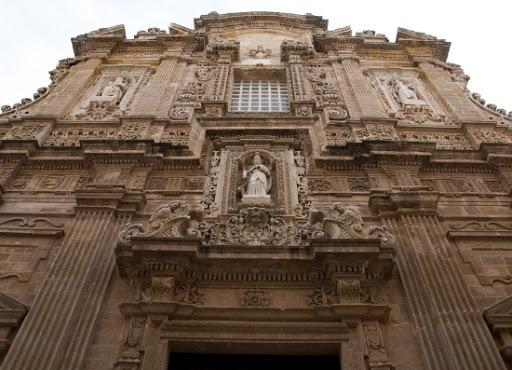 In the heart of the city stands one of the most important churches for Gallipoli, both religiously and artistically: the solemn Cathedral dedicated to Sant ‘Agata, whose construction began exactly in 1629, in the Baroque period. 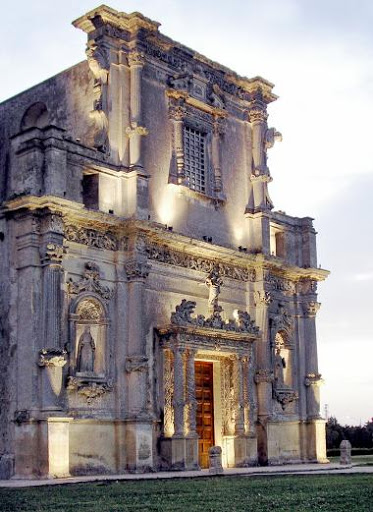 The convent of the Augustinians, with the adjoining church of Carmine, is a former convent complex located in Melpignano in the province of Lecce. The facade of the church, a high example of seventeenth-century Lecce Baroque, has an entrance portal formed by two pairs of columns, richly decorated and resting on bases that support the entablature surmounted by a stone statue of the Madonna del Carmelo. 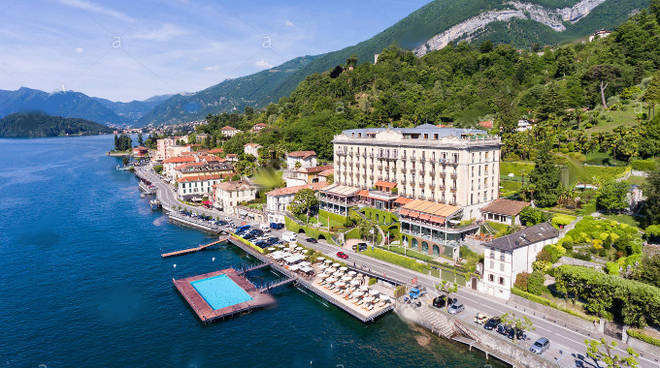